What is muscle fascia and how does it affect your flexibility and the way you move?

When trying to improve flexibility and range of motion, the muscles and their fascia should be the major focus of your flexibility training. While bones, joints, ligaments, tendons and skin do contribute to overall flexibility, we have limited control over these and can do damage to them if trying to stretch them directly.

What is Muscle Fascia?

Fascia is a fibrous connective tissue that is present throughout the entire body, not just the muscles. There are three main types of fascia: 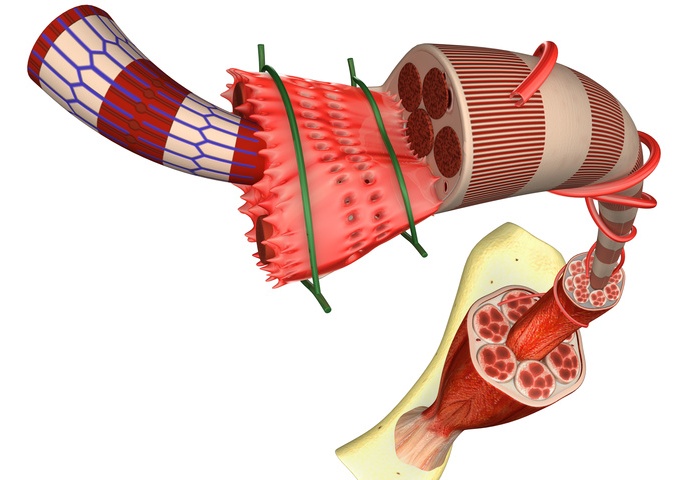 For the purpose of this article, we’ll stick with deep fascia as the main focus. In short, the Deep Fascia (or muscle fascia) is defined as; the connective tissue that surrounds (or encloses) individual muscles and muscle groups.

An individual skeletal muscle may be made up of hundreds, or even thousands, of muscle fibers bundled together and wrapped in a connective tissue sheath called the epimysium, which gives the muscle its shape, as well as providing a surface against which the surrounding muscles can move. Fascia, connective tissue outside the epimysium, surrounds and separates the muscles.

Each compartment contains a bundle of muscle fibers; each of these bundles is called a fasciculus (Latin = small bundle of twigs) and is surrounded by a layer of connective tissue called the perimysium. Each fasciculus consists of a number of muscle cells, and within the fasciculus, each individual muscle cell is surrounded by the endomysium, a fine sheath of delicate connective tissue.

What does Muscle Fascia do?

There are three main functions that the muscle fascia performs:

As stated above; when improving flexibility is the goal, the muscles and their fascia should be the major focus of your flexibility training.

When you are inactive for long periods of time, due to inactivity or injury, the muscle fascia starts to bind together. This prevents the muscles from moving freely against each other, and leads to a stiffness or tightness that limits normal range of motion and prevents freedom of movement. Regular stretching will help to keep your muscles and their fascia in good working order, and prevent your muscles and their fascia from seizing up.

Take a look at the video below; it’s a light-hearted explanation of what occurs when the muscle fascia starts to bind together due to a lack of movement and stretching.

Transcript of “Fascia and stretching: The Fuzz Speech”

Here’s the thing about the fuzz: We have seen the fuzz, you can see it now, (I’ll put it in over my voice). The fuzz yields to my fingertips. Sometimes I come across a stronger thicker strand, that doesn’t yield to my fingertips. That represents older fuzz sometimes or maybe it represents a nerve. But each night when you go to sleep, the interfaces between your muscles grow fuzz potentially and in the morning when you wake up and you stretch, the fuzz melts. We melt the fuzz.

That stiff feeling you have is the solidifying of your tissues, the sliding surface aren’t sliding anymore, there is fuzz growing in-between them. You need to stretch, every cat in the world gets up in the morning and stretches its body and melts the fuzz in the same way when I passed my finger through it. When you are moving it as if you are passing your finger through the fuzz. Just like I did on the cadaver form here. So you have to stretch and move and use your body in order to melt that fuzz that’s building up between the sliding surfaces of your musculature. The sliding surface, the shining white surfaces, the rectus femoris sliding against the vastus intermedialis, so these sliding surfaces are all over your body and the fuzz is all over your body: and as you move you melt the fuzz.

Now, what happens if you get an injury? Ouch my shoulder, my shoulder is stiff now. I’m holding my shoulder. I go to bed. I wake up in the morning. I don’t stretch my shoulder, I’m afraid it hurts. So, I’m wondering around like this. Last night’s fuzz doesn’t get melted. I go to bed. I sleep some more. Now I have two nights fuzz built up. Now two nights fuzz is more than one nights fuzz. Now what if I have a week’s fuzz or a month’s fuzz? Now those fuzz fibers start lining up and intertwining and intertwining and all of a sudden you have thicker fibers forming. You start to have an inhibition of the potential for movement there.

It’s no longer simply a matter of going ooh ahh stretch. Now you need some work. Now you might need to do a more systematic exploration of that place to restore the original movement that you lost. Usually this is the case, we have a temporary injury and we restore our movement but sometimes we call this aging. The build up of fuzz among a sliding surfaces of our bodies so that our motions become limited, that limit cycles become introduced into our normal full range of motion and we start to walk around like this. We’re all fuzzed over, our bodies are literally solidifying. We’re reducing our range of motion in the individual areas of our body and over our entire body in general.

So, I believe that one of the great benefits of body work whether it be massage or structural therapies or physical therapy or any kind of hands on therapy. These types of therapies introduce movement manually to tissues that have become fuzzed over through lack of movement whether the lack of movement is because of injury and a person is protecting that injury or because of personality expression.

Fuzz represents time. The easier it is for me to pass my finger through the fuzz, the less amount of time it’s been there. If I’ve got to whip out my scalpel, to dig my way through one otherwise sliding surface and another, you know that that’s been building up for a long time. So you can actually see time in fuzz.