Sports that Benefit from Hamstring Stretches 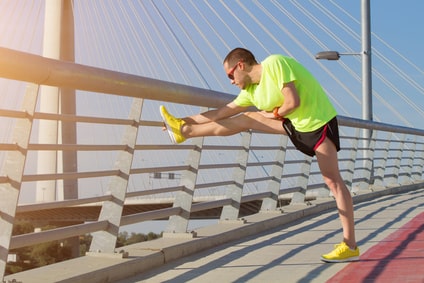 While performing the hamstring stretches below there are a number of muscles within the hip and upper leg that are stretched. Below is a comprehensive list of the anatomical muscle names involved in the following hamstring stretches.

As with most activities there are rules and guidelines to ensure that they are safe. Stretching is no exception. Stretching can be extremely dangerous and harmful if done incorrectly. It is vitally important that the following guidelines be adhered to, both for safety and for maximizing the potential benefits of stretching.

The other day, I got asked to go join a running group, which I did and I tagged along with this running group. Turned up at five o’clock in the morning and there’s probably about 20 or 25 people there and we headed out for a run. Now normally when I join a new group, I just like to sort of hang at the back, have a chat with a few people, get to know the people in the group, get to know what the group is about and so forth. So anyway, jogging along and there’s about five or six of us at the back of the group and one of the guys started telling one of the ladies about how it’s important to keep your foot up when you’re doing a hamstring stretch. And he was talking about the alignment of the hamstring and the alignment of the foot. So I’m running along listening to this (he had no idea who I was or what I do), and I thought to myself, this is just fantastic. This is exactly what I started all this writing and all my career basically. You know, over 20 years ago, 25 years ago I wanted to get people talking about stretching and flexibility and it was such a buzz to hear this guy and he wasn’t a coach or a trainer or anything.

He was just a general average Joe having a run with a few of his mates and he was just giving some advice about how to stretch properly and how to get more out of his stretching. And I thought, that was just fantastic that someone like that was, you know, talking about stretching and flexibility and bringing it into mainstream conversations about health and fitness. So that was a big buzz for me the other day and it was, you know, and whether I had anything directly to do with him talking about alignment and stretching and flexibility, probably not, but in some small way I’d like to think that I contributed. So that was a real buzz for me.

So it really is important that you keep the foot nice up and down so that everything’s in alignment. And this was one of the things I wrote about back in 1995 when I published my first book. So it’s great to see someone talking about it in, you know, everyday conversation with someone else. So that’s really important. The other thing that’s really important is the hip alignment. Now, it’s important to keep your hips at a 90-degree angle to your hamstrings. Again, why is that important? Because as I see a lot of people do and they’ll turn the hips out like this so they’ll do the hamstring stretch out to the side. Well, what that does is that places an emphasis on the inside or the medial side of the hamstring. So the medial side of the hamstring and the groin gets a great stretch but the outside gets neglected. And again, if you do this repeatedly over time you create this imbalance between the inside of your hamstring and the outside of your hamstring. So it’s important to keep those hips nice and square.

But I want to go on and take one step further from that, not only is it important to look after your alignment and make sure everything’s lined up properly but it’s also important to vary your alignment. So, while it’s not a good idea to stretch with your hips open like this all the time it is a great idea to vary your stretching so, sometimes you’re stretching with your hips open so you’re putting that emphasis on the medial side or inside your hamstrings. But it’s also important to stretch those hips closed off so move the leg across this way and then that places the emphasis on the outside or the lateral side of your hamstrings. So you’re getting an emphasis on not only straight down the middle, but you’re also getting an emphasis on the inside and the outside and you can do this with a lot of muscle groups.

You can do it with the calves out for example. So in that case, I’ll just take my shoe off so you can see a little bit better, but with the calf, what you can do is you can start off with your foot nice up and down everything in alignment but then sure, let it drop out to the side and give a little stretch then turn it to the inside and give a little stretch that way. It’s also a good idea you can invert your foot. So turning your foot in this way but then also turning your foot out in that way. So while alignment is really important, it’s really good to keep everything nice and square and in line don’t be afraid to vary the position so you’re emphasizing different parts of that muscle group.

So anyway, that’s my tip for this week. Make sure you’re conscious of your alignment and talk to people about stretching and flexibility if you have the opportunity. Talk with people, chat with people, pass on what you learned from me. Pass on to other people around you and hopefully, they’ll benefit from it as well. So thanks very much for watching. Take care. I’ll talk to you soon. Bye for now. 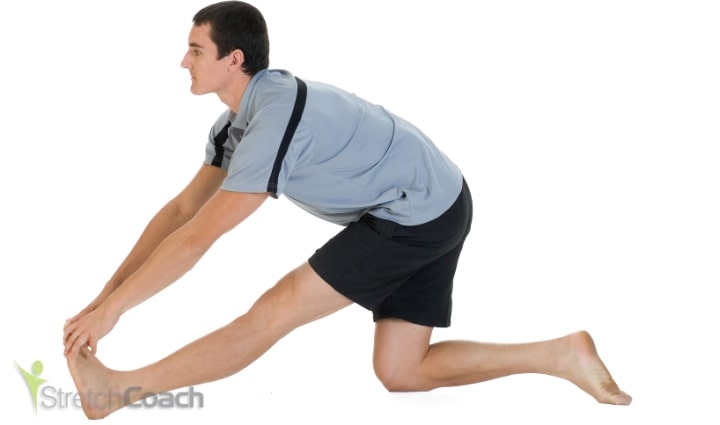 Kneeling Hamstring Stretch: Kneel down on one knee and place your other leg straight out in front with your heel on the ground. Keep your back straight. Make sure your toes are pointing straight up and gently reach towards your toes with one hand. Use your other arm for balance. Hold this stretch for about 20 to 30 seconds and repeat at least 2 to 3 times on each side. 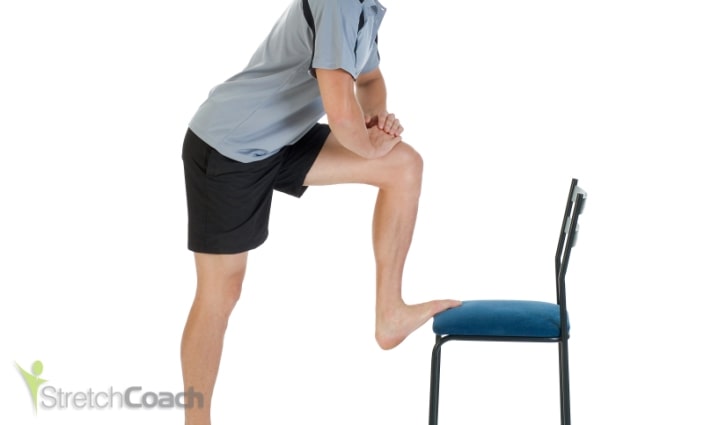 Standing Leg-up Hamstring Stretch: Stand with one foot raised onto a chair, fence railing or similar object. Keep your raised leg slightly bent, with your toes on the edge of the chair. Let your heel drop off the edge of the chair. Keep your back straight and gently move your chest towards your raised leg. As above, hold this stretch for about 20 to 30 seconds and repeat at least 2 to 3 times on each side.

Below you’ll find a few good stretches for your hamstrings. But don’t rely on just a few stretches; it’s important to do a range of stretches for the hips, buttocks, groin and calf. Please be careful, if you haven’t stretched your hamstring muscles, some of these stretches will put a lot of stress on the hamstring tendons. Warm-up first, then proceed in a gradual and gently way.